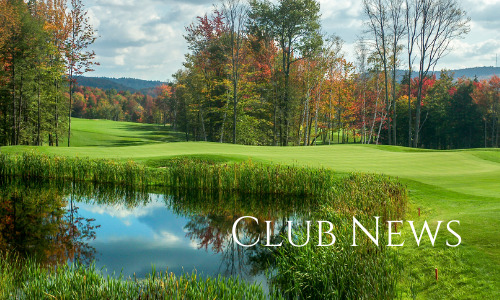 Ribolini, served as Associate Golf Professional at the Hanover Country Club (NH) and received the 2020 New Hampshire PGA Assistant Professional of the Year Award in April.

“Dustin is a wonderful addition to our Club and brings passion and a well-rounded skillset. His knowledge in all aspects of golf and his personable approach parallels that of our staff and our commitment to offering a great golf experience,” said Steve Rogers, Montcalm Golf Club’s Director of Golf.

Ribolini, originally from Montpelier, VT, is a 2008 graduate of North Carolina’s Campbell University PGA Golf Management school, where he earned a degree in Business Administration. He earned his Class ‘A’ PGA Membership in 2011.

Montcalm Golf Club has outstanding panoramic mountain views of Killington, Vermont’s Green Mountains and Mt. Ascutney, as well as rolling hills of velvet fairways and greens. In addition to a new state of the art practice and training facility, it offers one and two day golf schools throughout the summer.