HANOVER — As soon as next month, members of the Dartmouth College golf teams who once called the site of a former ski jump home will instead head off to a new domicile within eyeshot of a ski area.

The Ivy League school recently signed a contract with Enfield’s Montcalm Golf Club for use of the picturesque 6,829-yard, par-72 course, giving the Big Green a place of its own since the shuttering of Hanover Country Club this time last year. Dartmouth closed HCC last April as part of a campus-wide shutdown tied to the COVID-19 pandemic, a move made permanent when the school axed five varsity teams — including men’s and women’s golf — in a budgetary move in July.

The five were reinstated in January under the threat of Title IX litigation from the two eliminated women’s programs, the other being swimming and diving. Men’s golf coach Rich Parker has since returned to the team and is helping with the women’s program while Dartmouth seeks a new coach.

“It means a lot to us,” Big Green senior Jason Liu said in a Wednesday phone interview. “When Hanover Country Club was closed, that was a huge blow for us. With the team reinstated, now that we can practice at Montcalm, it will help a lot. Having a place to play is super-important.”

The Dartmouth teams have some past experience with the former private club, which began opening to public play about two years ago. Montcalm would likely have been the Big Green’s home course in 2020 had the pandemic and program cuts not come along.

The temporary shutdown knocked the Big Green out of the league scheduling rotation, Parker said, so it’s unlikely either squad will host a competitive match at Montcalm immediately. Ivy sports have been on hiatus since the pandemic’s arrival, and the league has yet to commit to a fall season for any sports.

“It’s good for the kids; it’s the closest place,” Parker noted on Tuesday. “As a rule, if you take away COVID, it’s not as crowded as some of the others. For myself personally, what I want for the kids is to play at a course that’s welcoming, where you don’t have to tiptoe around. That happens a lot in our league. We will be welcomed at Montcalm.”

“Obviously, it’s the good neighbor thing to do, no doubt about that,” Rogers said on Wednesday from West Palm Beach, Fla., where he works in the winter. “We’re probably the next viable facility in the state of New Hampshire. We’re probably less than 20 minutes by car from the campus, and I’m sure that played a role in their decision on where to go.”

Rogers said he also made sure to sell the practice facility to Dartmouth’s athletic department administrators at the time. It worked.

“We are excited to have our men’s and women’s golf programs being able to call Montcalm their home,” interim athletic director Peter Roby said in a statement. “I’ve visited the course and was impressed with the amenities related to practice and understand that it is a true test of golf. Our golfers will benefit from Montcalm’s hospitality and will enjoy all it has to offer.”

Liu said one of the things that drew him to Dartmouth was the proximity of Hanover CC compared to the travel other college golf teams often face. Although the course is closed with no word on its future, the college is still maintaining the socalled practice course on the east side of NH Route 10 for use as a range that the Big Green can easily access for practices or as a betweenclasses workout option.

“Honestly, we’re in a pretty good spot,” Liu added. “I think, honestly, it’s great that we’re still able to practice pretty near campus and have a really good course like Montcalm to actually play some golf on and practice at.”

Rogers is targeting a May 1 start to the season.

COLLEGE GOLF B4 “When Hanover Country Club was closed, that was a huge blow for us. With the team reinstated, now that we can practice at Montcalm, it will help a lot. Having a place to play is super-important.” 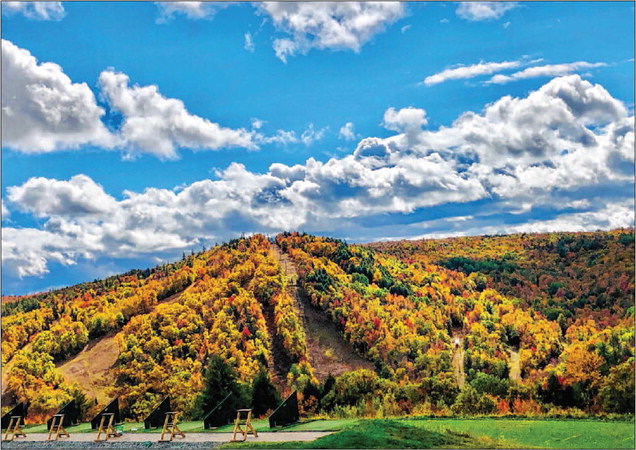 “We’re a championship-caliber course for hosting their events, and it’s something that’s going to go over quite well,” he said. “We have the ability to do things to the course like any other championship facility can, toughen it up or ease up depending on what the coaches want. … Their alumni and clientele will have a place to bring their guests, bring their boosters and be proud of the fact that they’re at a great layout and have a great value.”